This is terrifying because this person bought a 50,000 euro (that’s $61,780 USD) bottle of champagne, but I also have to laugh because they paid 10 euro for Coca Cola. Middle-American upbringing FTW.

This exists. Okay, not so much that this exists, but that there’s enough material for something like this to exist; and not just exist but flourish. “Rich Kids of Instagram” is a Tumblr site on which the author posts pictures of young people of outrageous familial wealth showcasing their moral bankruptcy and total disregard for reality on their Instagram accounts. Oh, and like any good Millennial, their expertise at bragging. Go figure. This makes me kind of terrified, or as the kids would say,

There’s always been those people who deny the fact that they’re getting older. Whether that meant patting their wrinkly, old faces with lead-based powder in the 1700’s (and ironically making their appearance go downhill faster–lead does *wonders* for your skin) or injecting botox and getting face lifts and tummy tucks at the dawn of the 21st century, there have always been those who fear aging. Maybe it’s just me, but I don’t really understand the insatiable desire to stay 18 forever (or 20, or 25, or what-have-you). Sure, everyone wants to be “young and beautiful,” and often what is called beauty is really just youth, but I don’t think I would inject my face with botulism or let someone stretch my skin tighter over my skull in order to make people think I’m younger (and/or made of plastic).

What is it about age, other than pure vanity, that scares everyone so much? We value the wisdom and experience we gain as we age, but it seems to be those pesky wrinkles and grey hairs that throw us for a loop. But really, it’s just aesthetics. You are more than how you look, and the sooner we all realize that, the better off we’ll be. All I’m saying is that cutting/poking/prodding/and spending, spending, spending hasn’t gotten anyone very far when it comes to looking younger. However, we do have a lot more women walking around looking like life-size, discarded barbie dolls.

But maybe it’s more than just looks. Maybe everyone’s trying to get back to looking young because they want to go back to being young; perhaps it’s less about aesthetics than it is about a living memory of being 18, or 20, or 25, and being “carefree” and “innocent” and all the cliche terms associated with youth. But why don’t we value our later years? Is pursuing your career, having a family, finding a partner, travelling, learning, and living as an adult really that lamentable? Sure, getting blitzed on Tuesday nights and having no responsibilities and no job (for some of us) and getting with all the hotties (like I said, for some of us) can be great, but I wouldn’t want that to last forever. What about other interests? What about being productive (or reproductive for more eager folks)? What about establishing a life and relationships outside of party buddies?

I’m just saying, maybe we should stop looking at 18-22 or 16-22 or whatever combination/range of years as “the best time” of our lives. Why not assume the best is yet to come and relish in the moment? Find good in being 25, 35, 45, 55, 65, and 95, and all the ages in between. I mean, just think of it this way: if you stayed 18 forever, beer pong would still be the preeminent subject of conversation, along with awkward teenage sex jokes and petty high school arguments of who-did-what-to-whom-and-don’t-you-think-that’s-just-awful??!!.

Consider this a friendly PSA to stop living in the past and embrace your present. 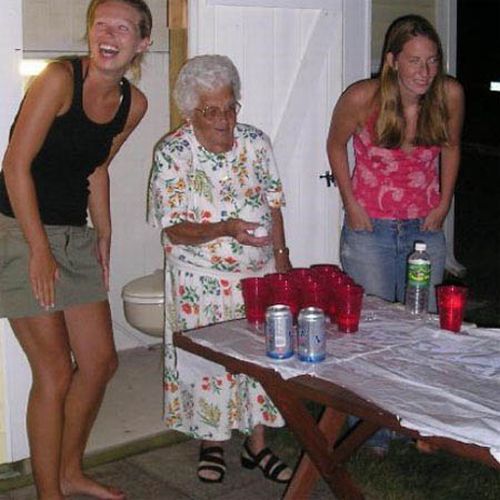