Mitt Romney is a weird guy.  I think we can all agree on that much.  He doesn’t really seem to understand what’s happening around him.  As any politician must, he bravely ventures into diners filled with Middle America’s most middle-ish of people.  Romney is a 1%er, in fact, he’s probably in the 0.005%.  Dude is rich.  Dude is so rich.  Dude doesn’t even know what a clearance rack is.  Dude probably doesn’t even like Target.  If you don’t regularly shop at Target, I have doubts that you understand “middle class.”

Romney’s absurd wealth makes him so out of touch and seemingly odd that he seems like an alien/robot, or a robot alien.  I just don’t think he can wrap his beautifully gold-plated brain around the milieu of normal life.  *By the way, I mean real gold; I’m not calling him a blond.

Are you wondering why I think he’s both a robot and an alien?

I’m just pretty sure he’s a robot alien.  As in, I think he is a robot who was likely designed by aliens far away in space, then maybe the robots rebelled and started to produce more of themselves, and now they are infiltrating other cultures and planets, and Romney is one of their best machines… His bid for the presidency is one of the final steps in their plan.

REASON:  He’s bad at talking like a human person.

Imagined Mitt dialogue: “Hello there, Average Joe.  I am Candidate Stone Hair.  I would like you to vote for me.  I will do anything, literally.  Also, what is a ‘flannel’ and why is everyone in plaid?”

“Hello there, waitress at diner.  I would like two poached eggs with truffle oil, on a bed of fresh mint, with a piece of Wonder Bread, toasted, and spread with pumpkin butter on one side and Belgian chocolate on the side.”  And then the waitress is like…  “?”

REASON: He just might be too rich.  I don’t think this is a “punishment for success” as Fox News might think it is; I just think someone that far out of the normal American experience won’t be able to understand what people need or want.  I don’t feel comfortable being represented by this person – just like I wouldn’t want the King of France leading our country.  That would be weird.

REASON:  His richness leads to thinking that the middle class stops at $250,000 per year.  Um, if you’re making a quarter of a million dollars, you’re upper class.  I bet that he cannot even imagine that a middle class family might make less than $100,000 per year.

The poverty line must be so astounding to him.

REASON: Well, it’s because he’s so robotic and awkward.  He doesn’t seem to understand humans.  I imagine that life in general is very confusing for him.  In this campaign, he’s had to sludge to such awful, lowly places (by his standards) and it’s hard.

He just doesn’t get it. 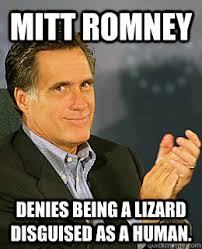 REASON:  I’m confused.  Isn’t this guy just the leftovers?  No one was excited about him a few months ago.

Mitt Romney is crazy-crazy.  He just confuses me.  What do you want?  What is your deal?  Why do you want all this power?  You don’t really have any views or thoughts that stay steady.  Ugh.

3 thoughts on “Mitt Romney Is a Robot-Alien, and other things I sort of believe.”